Amazon: inside the wild heart

Going up Negro river in an exclusive boat-hotel and sleeping in a lodge, under the starry sky of the largest forest and largest river basin in the world, listening to the sounds of the woods, is a unique experience. An experience of wonder at the beauty and mysteries of a still almost untouched part of the planet, where man is but one of the thousands of species of living beings breathing in what is the greatest green lung of Earth.   We arrived in Manaus for our great adventure of getting to know the Amazon. A little point of hers, but the best, her wild heart. Our destination is the Anavilhanas Archipelago and the Jaú National Park in the Alto Rio Negro – both considered Natural Heritage of Humanity – in a five-day expedition promoted by Katerre, an organization of ecological tourism and sustainable development.   Everything in the Amazon is superlative, disproportionate. The rivers, the forests, the fauna, the distances. The references we bring are of little use. The roads are liquid – rivers, igarapés, igapós, lakes and paranás – and the riverside cities are so many days by boat or so many hours by plane. The Amazon alone hosts 50% of the animal species and 80% of the plants on the planet. A biodiversity without size: 25 thousand species of fish, 36 species of monkeys, 20 species of parrots and more than 3 thousand species of birds. The density of the forest makes wildlife observation not always easy, you need a good local guide who knows the habits of animals and birds and the best places and moments to observe them. Here, too, human solitude is immense. There are only 2.6 inhabitants per km2. 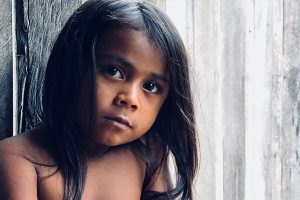 On the banks of the Rio Negro, Manaus is your gateway. There is no longer the aura of the rich rubber era, when the Teatro Amazonas received important opera companies and lyrical singers, but the memory of this past persists in the beauty and grandeur of the theater itself or in the period architecture of the Rio Negro Palace. Visiting the Amazonas Theater is mandatory, even a civic duty. In the streets, in the market, on the docks of the port, the man of Manaus, the manaura, seems to be the synthesis of this doorway. In it, the forest appears with all its force, both in its indigenous traits and in the cuisine based on fish, cassava and exotic seasonings, in typical and sweet fruits, in the “bottles” of natural medicine, handicrafts, music and dance . A visit to the Mercado Municipal, another jewel of the architecture of the rubber cycle, is indispensable to get an idea of ​​this diversity of flavors, colors, sounds and aromas.

In Manaus we had dinner at Caxiri Restaurant, by Chef Débora Shornik. It is an authorial cuisine, with Amazonian inspiration and appreciation of seasonal ingredients. Try the entrees like the tambaqui cookie and then the tambaqui rack or the stuffed matrinxã roasted on the embers (photo). For dessert, nothing like the surprise of tucupi – black tucupi gravy, cubiu compote, chestnut ice cream and caramel nut.

UP THE RIO NEGRO TO ANAVILHANAS

Leaving Manaus, we will take the asphalt road to Novo Airão. We arrived at lunch time. This is where we climb aboard our boat-hotel, the Jacaré-Açu. With 64 feet, it is of the Regional-Premium category, all in wood, following the traditional Amazonian construction techniques, with eight super comfortable cabins, all air-conditioned. From now on civilization will be behind us, as there will be no more signal for internet and cell phone. A pleasant surprise is that there will also be no more mosquitoes, because the waters of the Rio Negro prevent their proliferation.

We made our first expedition through the Anavilhanas Archipelago in small fast boats, the so-called “flying sails”. The Rio Negro, in this place, reaches 20 kilometers wide !. There are four hundred islands, forming immense channels, all covered with untouched forests. It is within this archipelago, that it looks more like a labyrinth of islands, streams and secret corners, that the small living beings of the forest give the spectacle.

“The Amazon is to be appreciated by observing details, sometimes almost invisible”

While sailing, you can see tucuxis monkeys, pink dolphins and birds of the season, such as maguaris, herons, canindar macaws, várzea parrots, japos and colorful arirambas. On the way, we stop for a bath with buoys, in the calm, dark and transparent waters of the river. Then we continue to Mirador do Madada, a two-storey bungalow in the middle of the forest, which offers a great view of the region. It is in the belvedere that our dinner is served. Whoever wants to sleep in a hammock. In addition to “feeling” the forest, with the sounds of animals and nocturnal birds, the sunrise, seen from there, is an unforgettable experience!

The first “attraction” of our second day of travel is breakfast at Mirante do Madada, enjoying the beauty of the sunrise. It is a typical breakfast of the region, with fruits, jams, tapioca, tucumã and other delicacies. A well-reinforced coffee, after which we will have a three-hour walk in primary forest to the Madada Caves.

It is a trail without difficulties, but a good exercise. Primary forests are native forests with millions of years without human intervention. Here the cycles of nature are renewed in all their extreme complexity. concentrating the greatest possible biodiversity, with trees and plants that have reached the maximum degree of their development. As we move forward, what most impresses are the rock formations that are emerging. Huge stones, of varied shapes, sometimes composing curious scenarios. As is the case with the Sandwich Stone, a set of flattened, overlapping stones that seem to reproduce two gigantic dark slices of bread with a filling of light stones in the middle. Our guide Samuel explains that the caves, in fact, are empty, lofts that were formed at the time of the collapse and roll of huge stone blocks, in a very remote time, accommodating one on the other. The rocks make a powerful counterpoint with the forest, which could not swallow them even after thousands of years.

In return, we visited a local caboclo.

“The life of the riverside caboclo is all ruled by the forest and the rivers: the techniques and materials of construction of his house, his gardens and orchards, his cooking, the canoes with which he moves. And also their stories and their mythology. “

Then another refreshing dip on the Rio Negro before lunch on board. And then we set off for Praia do Sono. It is there that we will dine, around a bonfire, listening to the legends of local folklore. 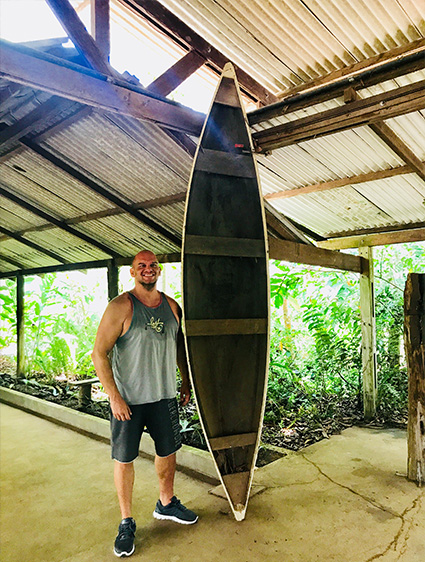 Sono Beach. Again, the same beauty show. After our delicious regional coffee and take the road to the National Park of Jaú. It is the largest freshwater forest park in the world. It is composed of three rivers, the Unini, to the north, the Carabinani, to the south, and the Jaú, in the center, and an infinity of small streams of dark waters. It is administered by the Chico Mendes Institute of Biodiversity. Due to the not always easy access, its trails, waterfalls and streams are turistically very little explored. Porpoises, monkeys, sloths, pacas and birds can be observed in overnight stays in the jungle, or the river, near sunset time.

“We are in the flood season and what we see on the banks of the rivers are the so-called igapós forests, which are flooded for six to eight months in the year.”

On the way, we stopped to meet the ghost town of Airão Velho, which was very prosperous during the rubber cycle. Today it is a ruined city, which was abandoned by the residents in the 1950s, now taken over by the forest. The trees sprouted inside the houses – some of them imposing – of the public buildings, of the church, clinging to the walls with their roots and lianas, like boa constrictors. The view is impressive. The legends about the escape of the inhabitants are many, but the truth is that, after the rubber, the city died even was lonely, isolated and very difficult access at the time.

“Nearby we went to meet a typical riverside community. We met the school, talked to the children and the teacher. We discovered that cassava is one of the ingredients that are in almost every meal of the riverside. “

In the Jaú National Park we anchored at the Chico Mendes Institute base. And then we went on a walk to see the great tree of the Amazon, samaúna, known as the “tree of life” or “ladder of heaven.” Forest people consider it the “mother” of all trees. Its roots are called sapobemba. Our meeting with the Umauna was exciting. When they emerge from the earth, forming the base of the trunk, its roots are impressive, gigantic. Its canopy, which sight can barely reach, is leafy, open and horizontal. And as with so many other trees, saumaúma is also part of folk medicine: both its sap and its bark are used to cure various evils.

From Rio Jaú we pass to the Pauini, a large tributary with numerous waterfalls, such as those of Preto and Carabinani. At the end of the afternoon, we return to the boat and sail to the Mirador do Gavião Lodge, where we will spend the night. An unforgettable experience.

Genuine contact with the forest as was our evening out in small boats, for the focus of the alligators. It was an exciting experience. When the light is thrown into the water, where apparently there was nothing, dozens appear, sometimes hundreds of bright eyes. Blinded by the light, the alligators become static, with open eyes, as if forming a small constellation of stars. Unforgettable!

LOOKING AT THE GAVIÃO LODGE 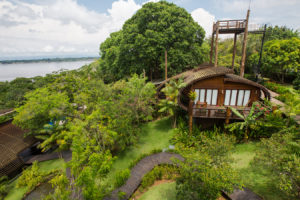 The Mirador do Gavião Amazon Lodge sits on the banks of the Negro River, in front of the Anavilhanas National Park. A masterpiece of comfort and sustainability, where we spent our last night. It has seven spacious bungalows erected in hardwoods that refer to the shape of inverted boats, and interior design that incorporates the forest materials: natural fiber weave coverings, noble wood furniture with marquetry details, wicker baskets and other beautiful pieces of wood. regional crafts. The founder and founder of the Katerre Expedition and Mirante do Gavião, Ruy Tone, explains that many of them were created by the professionals of the Almerinda Malaria Foundation, an NGO the hotel is a patron of and supports.

The Sustainable Lookout project was signed by Atelier O’Reilly Sustainable Strategies. The buildings have their floors elevated, so as to preserve the permeability of the soil, and the lighting and ventilation are natural. Solar power supplies the electrical system and water heating, and the organic waste goes all for composting. The landscaping, with more than 70 native plants and fruit trees, was in charge of Clariça Lima, who was inspired by the engravings that the British botanist Margareth Mee did in its expedition by the Amazon.

Spread out on the high ground, the bungalows are connected by catwalks to the lower part, where there is the modern swimming pool and the huge roof that houses the Camu Camu Restaurant, with menu that highlights the Amazonian ingredients and their rare fish in creative recipes. By kayak, it is possible to observe the back and forth of the boats sailing along the river and the pier of the hotel, which is often regular, is also a place of departure and arrival of the river expeditions of Katerre, an ecotourism company whose purpose is to offer the tourist a deep and genuine experience of contact with the forest. 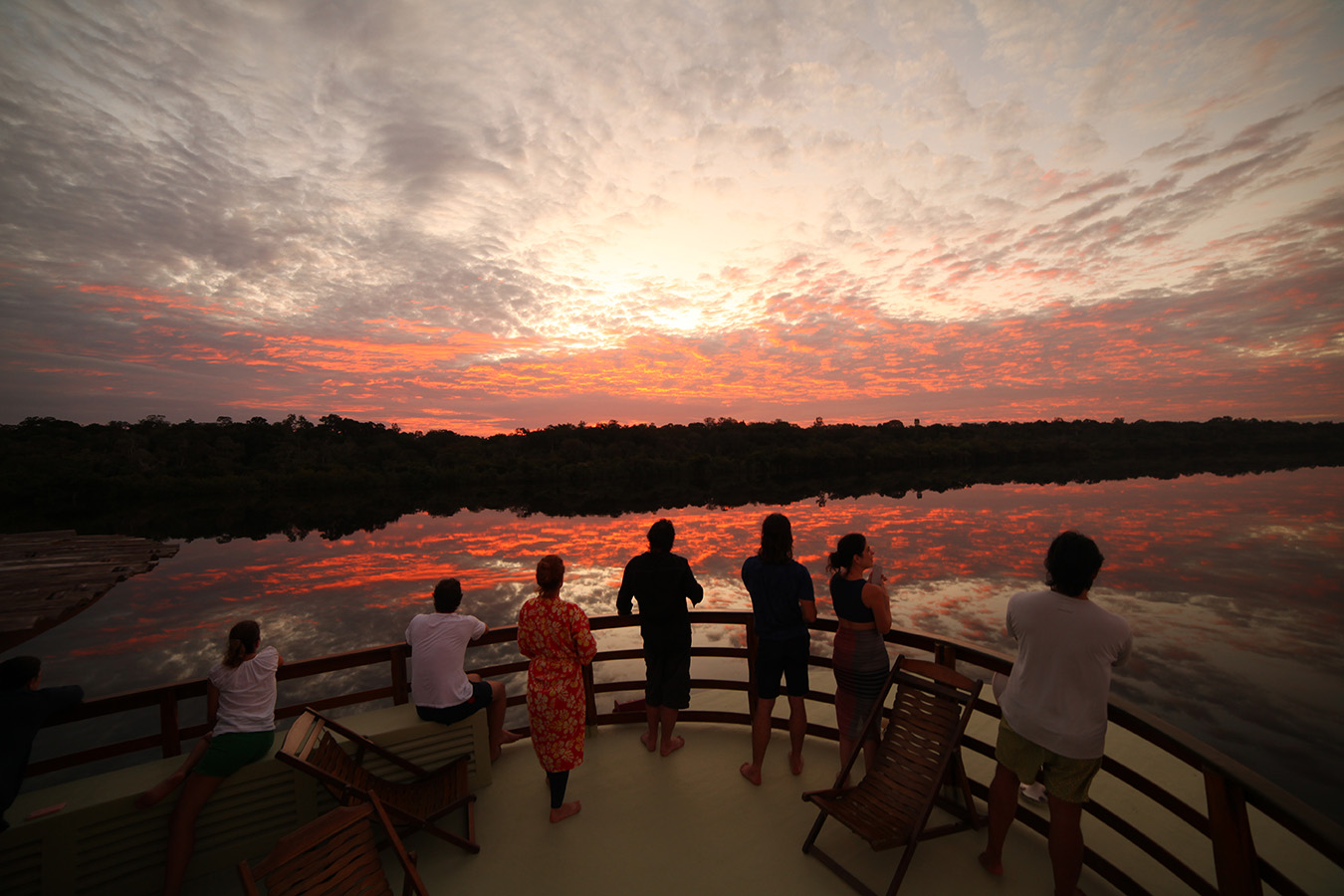 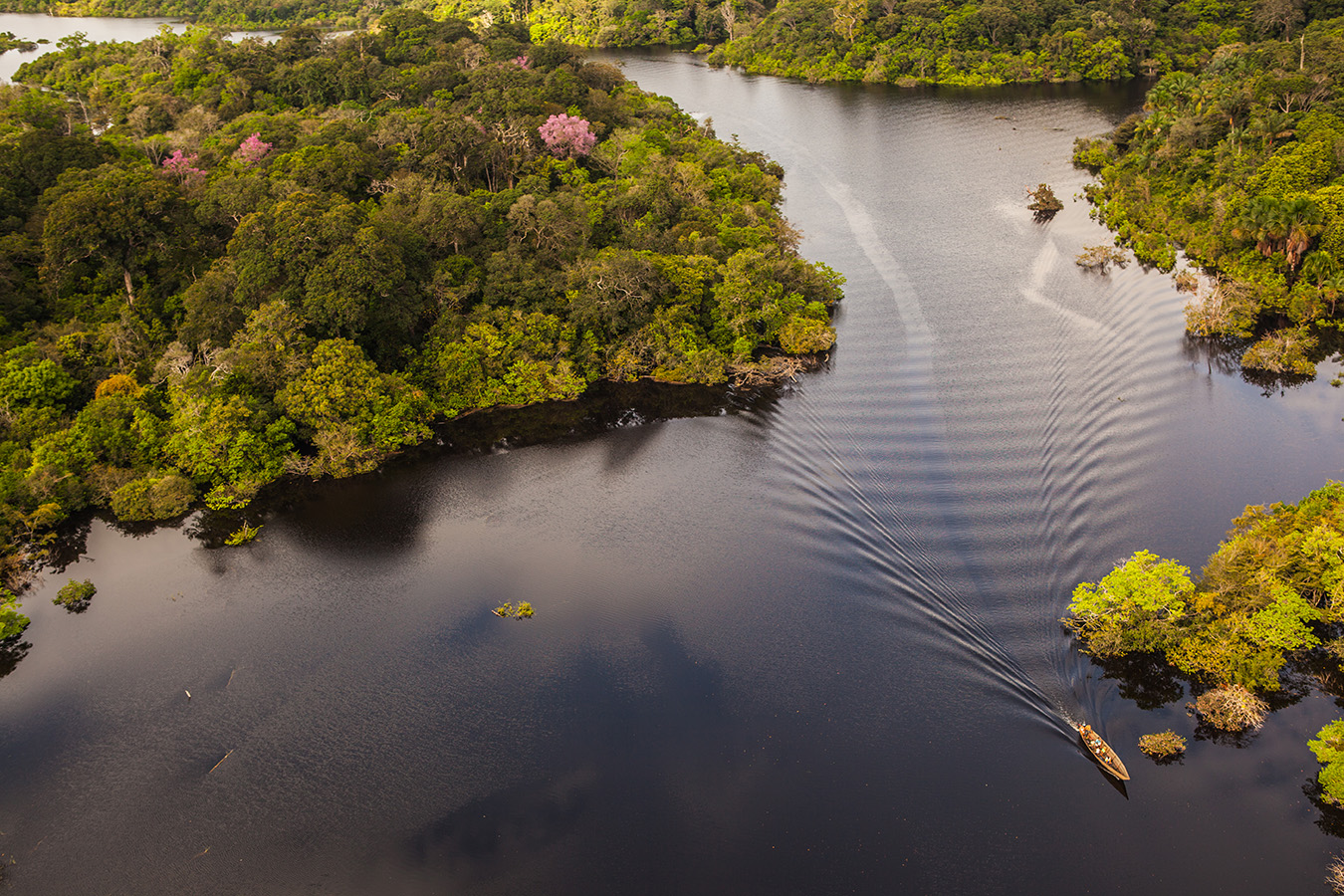 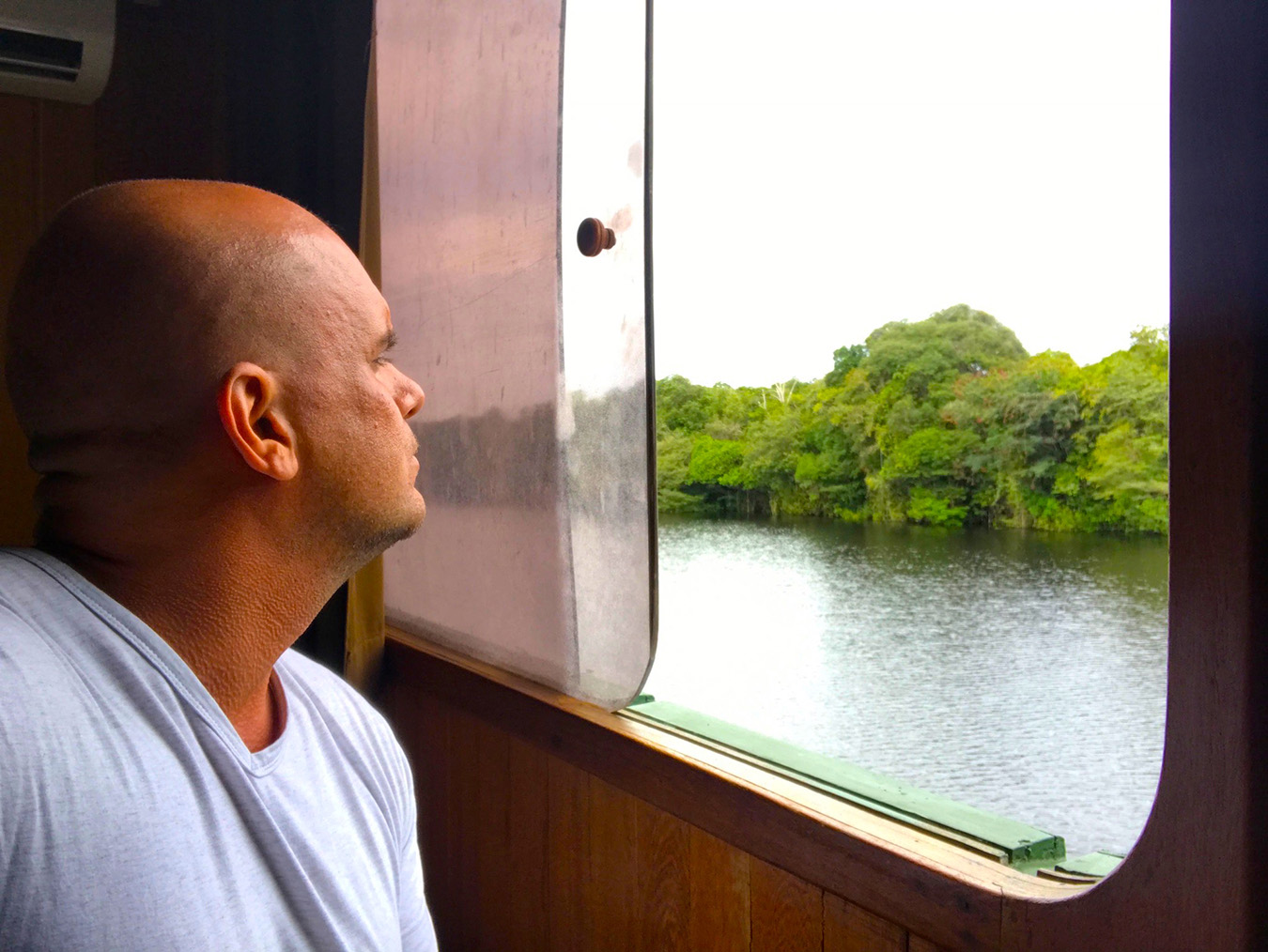